driven to serve. ready to fight.

Success is
our Mission.

Every state across the country has some sort of law in place to prevent individuals from driving while distracted by a mobile phone. The Commonwealth of Pennsylvania is no different. We want to examine the texting and driving laws in place in Pennsylvania as well as look at some of the dangers related to distracted driving. Speak to a car accident lawyer in Philadelphia to learn more!

Texting and Driving is Banned in Pennsylvania 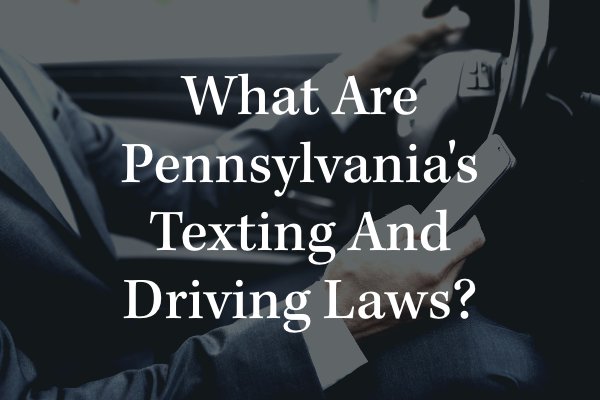 The Commonwealth of Pennsylvania officially prohibited texting while driving in 2012. As the law states, drivers cannot use an Interactive Wireless Communication Device (IWCD) to send, write, or read a text-based communication while the vehicle is in motion.

An IWCD Is defined as any type of wireless device that can be used for texting, emailing, browsing the Internet, accessing social media, instant messaging, etc. This can include cell phones, iPads, computers, or any other type of interactive personal digital assistant.

The law is broadly written and defines text-based communications as instant messages, emails, text messages, or any other type of text input that can occur on these devices.

The Commonwealth has made this a primary offense, which means individuals can be pulled over by a law enforcement officer if the officer believes that the individual was operating a text-based device while also driving the vehicle. There is a $50 fine for convictions under this law, and this law preempts any local ordinances that restrict interactive wireless devices used by drivers.

This violation does not carry any points against a license as part of the penalty, and it will not be reported on a driver’s record. However, for commercial drivers, these violations will be reported as non-sanction violations.

This texting while driving ban does not include GPS devices, systems or devices that are integrated into the vehicle, or communications devices inside of a mass transit vehicle. Additionally, the law does not allow law enforcement officials to seize mobile or interactive devices.

Talking on the Phone and Driving

Drivers in Pennsylvania are permitted to talk on their phones while driving in. This includes using the phone either as a handheld or with a hands-free device. However, we strongly encourage any driver to refrain from making or receiving phone calls while they are operating the vehicle. This will only increase distraction.

According to information available from the Pennsylvania Department of Transportation, we can see that there were more than 11,000 total crashes involving distracted drivers reported during the latest year of data on file. Out of these incidents, there were 43 fatal crashes reported. Aside from speed-related incidents, distracted driving is the second leading cause of crashes in the Commonwealth.

Distracted driving can occur in a wide variety of ways, not just texting or talking on the phone. However, with the extreme proliferation of advanced mobile devices, texting or using these devices is becoming more and more of a problem when it comes to distractions on the roadway.

We strongly encourage all drivers to practice not using these devices when behind the wheel. Just about every device has a do not disturb option that should be used when driving a vehicle. Speak to a car accident lawyer in Philadelphia to learn more!